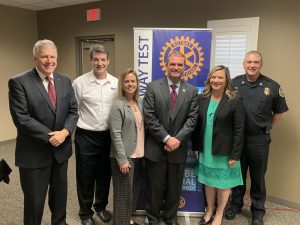 Dr. Del Phillips, the Schools Director for Sumner County, took some time out of his schedule to visit with our club on Thursday, Feb. 21.

He was introduced by Rotarian and School Board member Jim Hawkins.

“Eight years ago (when Phillips was hired), if we were a car…we’d gone off the rumble strip and we were in the ditch,” Hawkins said. “Under Dr. Phillips leadership and the school board and the county commission we have brought Sumner County schools to the point where we are recognised – consistently – as one of the top performing school systems in Tennessee.”

Dr. Phillips, a member of the Hendersonville Evening Rotary Club, said, “It almost like seems like coming home since I know most of you.”

He then updated the club on the activities of the school system, which consists of about 30,000 students on 49 campuses and about a $260 Million budget.

In addition, the average ACT scores have increased over the last few years.

As a result, Phillips said, “Last year our senior class has just under $60 million in scholarship offers, which is just over $27,000 per graduate.”

Dr. Phillips also talked about partnerships with area colleges – Vol State, Union, the TCAT, and Welch College – which help students get ahead quicker through dual enrollment.

“We have a middle college that is on the campus of Vol State,” Phillips said, “where students graduate with an associate’s degree the week before they graduate from high school. I think this year we will have about 70 who will graduate this year. I think there are only about 48 of those kinds of those programs in the country.

“Just as I mentioned middle college students at Vol State,” he later added, “students that want to do something the the technical career field – they can go and get that same head start (at the TCAT in Portland)…last year, I believe we had every student that graduated from the Portland facility had a job when they graduated – they went straight to work.”

Dr. Phillips also took time to address the issues of school safety and how he deals with the population growth in the county.

To hear his full remarks – including a Q&A session, click on the link below.

Please share our news:
This entry was posted in Club News. Bookmark the permalink.