About the Gallatin Rotary Club 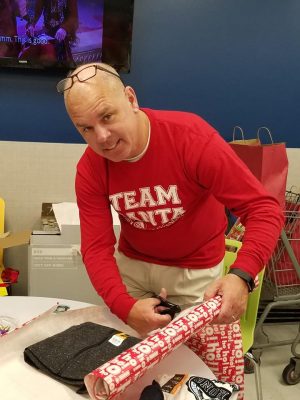 Richie Harville normally inducts new members and cuts up at our regular meetings with his great sense of humor. Here’s a pic of him cutting wrapping paper at our 15th annual Christmas for Kids event in 2018, and it looks like he wrapped his left leg. Photo from Jim Hawkins.

The Gallatin Rotary Club was organized December 6, 1923 and admitted to Rotary International on December 21, 1923 with club number 1583. Will R. Manier of the Nashville Club presented our charter to the club. He was at that time a member of Rotary International’s Board of Directors and was later president of R I in 1936-37. The following year the Gallatin Club won a prize gavel at the Inter-City meeting in Nashville. 100% of the Rotarians and their wives attended the presentation. The club chartered a private car on the Nashville-Gallatin Interurban line, and carried along their own band.

We care. We serve. We are committed. We are here.

We are the Gallatin Rotary Club. We are people of action.

Past Presidents of the Gallatin Rotary Club