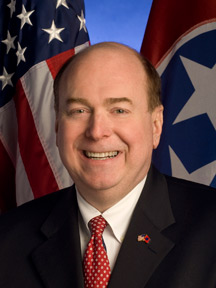 David H. Lillard, Jr. has served as Tennessee State Treasurer since his election by the Tennessee General Assembly in January 2009. He has extensive professional experience in public and private corporate finance transactions, municipal finance, governmental budgeting, and related fields.

Under his leadership, the Tennessee Treasury Department internally manages investments in domestic equities, fixed income, private equity, real estate and strategic lending valued at approximately $71 billion throughout the year. Additionally, Treasury directs multiple state programs with a staff of approximately 290 employees and a department budget of $47 million. The Treasury Investments Division achieves investment returns consistent with its peers while maintaining an investment expense and administration expense that is among the lowest in the southeast.

Treasurer Lillard has worked to improve the financial standing of the state and the financial quality of life for Tennessee citizens. His achievements include restructuring the state pension fund to an adjustable hybrid plan, one of the most innovative reforms in the nation, to provide a cost effective, sufficient and sustainable retirement benefit. The state’s defined benefit pension plan, the Tennessee Consolidated Retirement System (TCRS), serves over 350,000 active and retired Tennesseans including all state employees, many higher education employees, K-12 public school teachers and many local government entities. Under his leadership, Tennessee became the first state to enact a requirement that all defined benefit public pension plans offered by public entities must annually fund 100% of the Actuarially Determined Contribution and must adhere to certain recognized standards in plan management.

Treasurer Lillard is an attorney who earned a Juris Doctor degree at the University of Memphis and also a Master of Laws in Taxation (LL.M. in Taxation) from the University of Florida. He practiced business law for over 25 years in the private sector, specializing in finance, securities, health and tax law. He served as counsel in equity and debt securities offerings, and mergers and acquisitions transactions. He also practiced municipal law, emphasizing the fields of economic development and municipal finance. During his law practice, Treasurer Lillard was listed in multiple editions of The Best Lawyers in America, and achieved an “AV” peer rating by Martindale Hubbell. He served as a Shelby County Commissioner, was Chairman of the Shelby County Board of Commissioners and also served as president of the Tennessee County Commissioners Association. Before his election to the Shelby County Commission, he served as a Shelby County Election Commissioner for nine years.

Treasurer Lillard was raised in Tennessee. He is married to Patricia Newton and has three children, Scott Lillard, Brooke Lillard, and a stepdaughter Rachel Newton. He is a lifelong United Methodist and member of Christ United Methodist Church in Memphis.