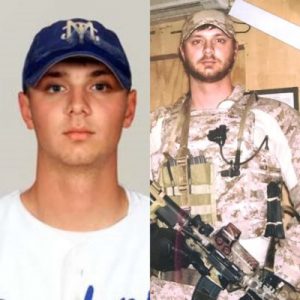 Jason Kuhn was a closer for a top 25 Division I baseball program with dreams of reaching the major leagues, but he was suddenly afflicted with what is called “the yips” and could not even play catch.

“I woke up in my apartment foggy from a binge and knew something had to change.  I recognized that victimhood was producing more victimhood.  I was going nowhere fast.  I decided I would not allow failure in baseball to define the rest of my life.  I stopped viewing the failure as having taken my purpose and started viewing it as having an intrinsic purpose for me to be forged into a stronger person and fulfill a greater calling.  The problem was, I had no clue what to do next.

“That fall was September 11, 2001.  I watched two airplanes kill 3,000 people on live television in my dorm room.  Through much prayer and reflection, I felt God spoke to me.  I had believed since I was four years old, that I would be a Major League Baseball player.  Now, for the first time I pivoted and accepted that playing professional baseball would not be my future. I began a new adventure to become a Navy SEAL.”

There is a ton more to his story; you won’t want to miss this meeting.