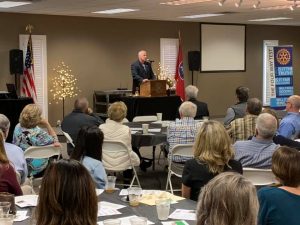 Blake Parks, the executive director of Gallatin Cares, is also an SEC football official, and he came to share his experiences with the Gallatin Noon Rotary Club on Thursday, Feb. 7.

During his remarks, Parks talked of challenges officials face and told stories of very humorous times he has had on the field during the course of intense gridiron action.

For example, he spoke of the time his officiating crew had a rookie on their staff and he and the other members of the crew got former UT Coach Butch Jones to scream at the guy for messing up for a full TV timeout when he had done nothing wrong. “He was quite an actor,” Parks said. “He had veins popping out of his neck and everything.”

In another instance, Steve Spurrier, who Parks called “a genius,” got so mad during a game he threw his visor, clipboard, headphones, and everything out of his pockets. “I didn’t think he was done, so I started handing him stuff out of my pockets I thought he could throw,” Parks said.

Another story involved former UT Coach and current Athletic Director Philip Fulmer. He was afraid the crew on which Parks was working botched a call on a punt and followed Parks all the way down the field screaming at the top of his lungs. Parks eventually told Fulmer he had “good news”: the officials were on top of the call and it was already going to go Fulmer’s way.

“Well now that I’ve made a fool of myself on national television, you’re going to have to stand here and take it some more,” Parks recalled Fulmer telling him. “He was waving his arms all around and carrying on but speaking in a normal tone and asking me stuff like how I was doing and where I was going to go for dinner.”

“Coaches can be the nicest people in the world, but they are crazy,” he said. “Especially on game day. There’s so much pressure on them and so much money at stake. They get crazy.”

In another game, Parks was working at Neyland Stadium, and there was a questionable call the crowd didn’t like.

“We normally go into a very secure area and get in a van and we have a police escort out of there,” he said. “That night, there was like 500 people in there and they were rocking the van and us and everything. (The official) in the shotgun seat turned to the van driver and told him, ‘You need to get more security down here.'”

“Without hesitation,” Parks remembered, ” the van driver looked at him and said, ‘You don’t understand; security is on their side.'”

Parks also talked about how much technology has changed the scrutiny on officials, citing instant replay, HDTV, and DVR’s. “You can now stop and rewind and fast-forward and pause, but we have a split-second to make a call, and we only have one angle to see to make a call,” he said.

And the stakes are high. Parks recounted a time before all the technology and instant replay where they messed up a call and it cost the conference $1 million because a team got a lower slot in a post-season bowl.

With the new technology, the stakes – and the scrutiny – is even higher, he said, because of the onset of legal gambling, adding he thinks it’s all making it hard to produce a next generation of football officials.

With his fantastic story-telling ability and mix of humor and information, Parks kept the Rotarians in attendance captivated well past their normal end time.

When President Bill Sorrells noted this, Jim Hawkins remarked, “One could say we went into overtime and Mr. Parks scored a touchdown.”

The Gallatin Noon Rotary Club meets at noon almost every Thursday. We currently gather at was is appropriately called “The Gathering Place” where we have good fun and great speakers.

You don’t have to be a member to attend – we would love to have you come and learn more about what Rotary does for the Gallatin community.

Please share our news:
This entry was posted in Club News. Bookmark the permalink.